Archaic green colours time. Passing centuries are evergreen. To mauve belongs a decade. Red explodes and consumes itself. Blue is infinite. Green clothes the earth in tranquility, ebbs and flows with the seasons. In it is the hope of Resurrection. We feel green has more shades than any other colour, as the buds break the winter dun in the hedges. Hallucinatory sunny days.

I waited a lifetime to build my garden,

I built my garden with the colours of healing,

On the sepia shingle at Dungeness.
I planted a rose and then an elder,
Lavender, sage, and Crambe maritima,
Lovage, parsley, santolina,
Hore hound, fennel, mint and rue.
Here was a garden to soothe the mind,
A garden of circles and wooden henges,
Circles of stone, and sea defences.
And then I addded the rust brown scrap,
A float, a malin and old tank trap.
Dig in your soul with the compost from Lydd,
Cuttings, divisions are placed in frames,
Protected from rabbits with neat wood cones.
My garden sings with the winds in winter.
Braving the salt which sails in plumes,
From the rolling breakers that gnaw the shingle.
No Hortus Conclusus, my seaside garden.
With poet's sleeping and dreaming of daisies.
I'm wide awake on this Sunday morning.
All the colours are present in this new garden.
Purple iris, imperial sceptre;
Green of the buds breaking on elder;
Browns of the humus, and ochre grasses;
Yellows in August on Helichrysum,
That turns in September to orange and brown;
Blue of the bugloss, and self-sown cornflower;
Blue of the sage and winter hyacinth;
Pink and white roses blowing in June;
And scarlet rosehips, fiery in winter;
The bitter sloes to make sweet gin.
Brambles in autumn,
And gorse in the spring. 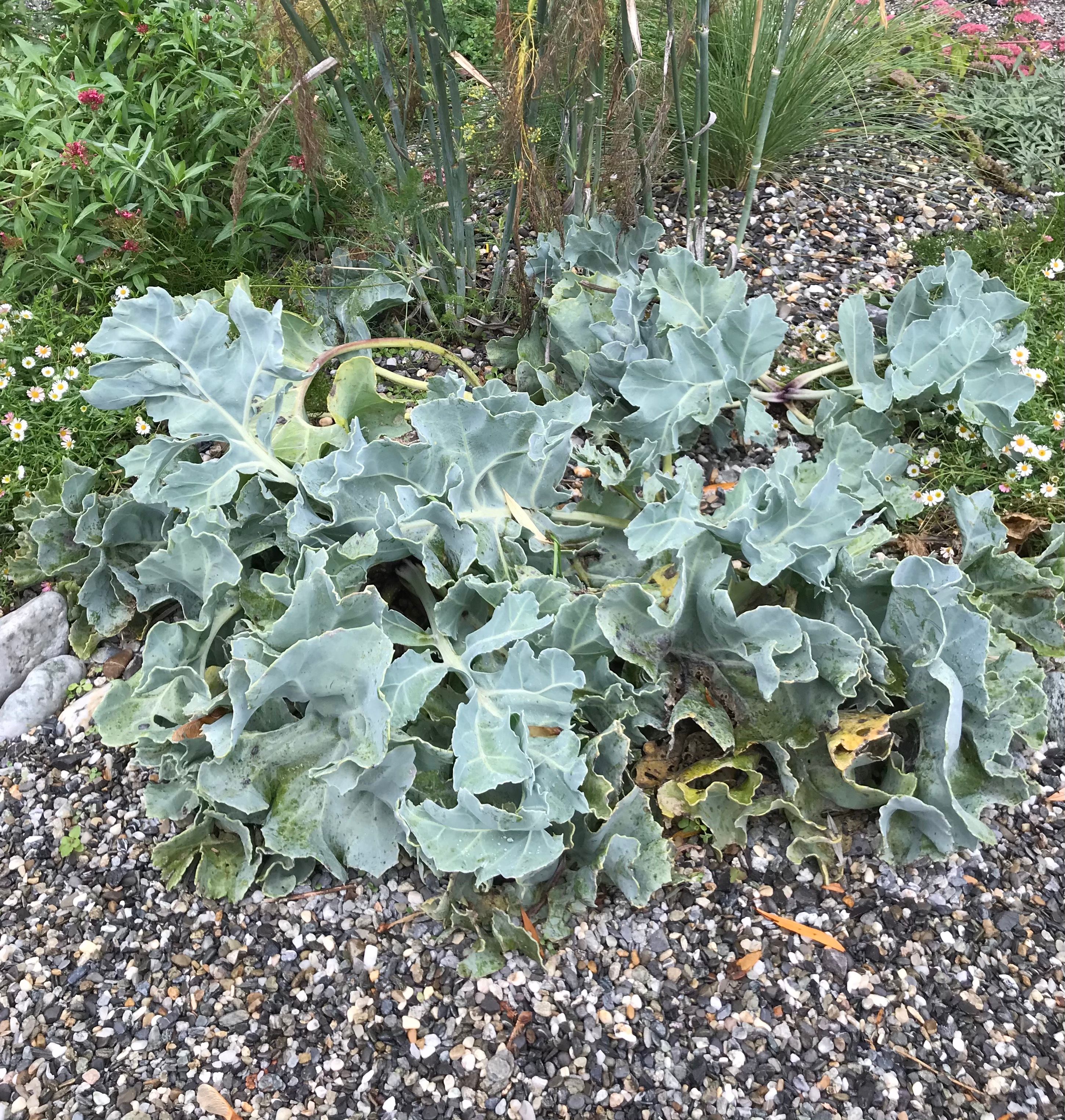 crambe maritima (common name sea kale, seakale or crambe) is a species of halophytic flowering plant in the genus Crambe of the family Brassicaceae (also known as Cruciferae), that grows wild along the coasts of Europe, from the North Atlantic to the Black Sea.

The plant is related to the cabbage and was first cultivated as a vegetable in Britain around the turn of the 18th century. Blanched stems are eaten as a vegetable, and had become popular in the mid-19th century in Britain, in Victorian times.

Growing to 75 cm (30 in) tall by 60 cm (24 in) wide, it is a mound-forming, spreading perennial. It has large fleshy glaucous collard-like leaves and abundant white flowers. The globular pods contain a single seed.